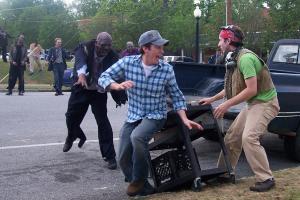 Darren, a fearless, but inept, young filmmaker, returns to his small Georgia hometown to make a documentary about flowers and their significance at the major stages of human life: birth, death, marriage, etc. By shadowing his older brother Rusty, who delivers flowers for a living, Darren hopes to capture raw truth and reality. But, Rusty has no desire to be filmed, and finding a professional crew in Tokyo, Georgia is no easy task. Yet, Darren soon finds that these are the least of his problems when zombies (yes, zombies!) begin taking over the world and threatening his artistic vision. Nevertheless, Darren is not one to give up easily; he vows to finish his documentary as he envisioned it, by filming around the zombies and pretending that nothing out of the ordinary is actually happening.