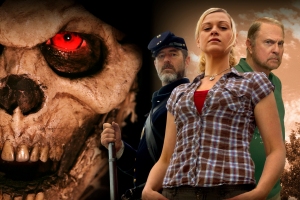 Corporal Henry Trout fought valiantly in the forgotten skirmish of the Lethe Confluence during the Civil War. The year was 1861. In 2011, he will come face to face with his descendants as the battle for blood begins. Tyler and her brother Chad, Henry’s fifth generation grandchildren, will challenge the very legend of Charon the Ferryman, as the lines between the living and the dead become blurred. Starring Gil Gerard.
86 min.