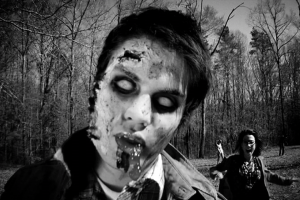 In the aftermath of the apocalypse where society has grown accustomed to the fact that the undead only attack when provoked, it is a felony to shoot a zombie in the United States of America. Hordes of harmless corpses roam the streets like cattle. The state has built reserves to keep them contained, but there are too many of them and they’re growing everyday because even if you die of natural causes, still…you become one of them.

Clay Marshall struggles with this reality as he watches his sister, Mia, fail to accept the death of her boyfriend. She visits the wandering corpse of her lost lover constantly and acts as if he’s still alive.