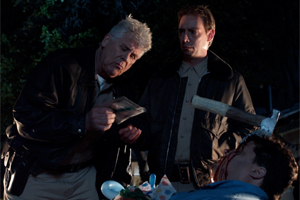 Ken Boyd, fresh out of the loony bin, has returned to his small town, where he lives with his mother (Karen Black) and works at the ice cream parlor. When not scooping ice cream or dealing with his mom’s insults, he’s out seeking revenge on those he deems responsible for his miserable life. However, carrying out his plan becomes more difficult when his estranged daughter shows up, eager to get to know her father. Further complicating matters is the Town Sheriff (Barry Bostwick), who is hot on Ken’s trail, and sleeping with Ken’s mom. Executive produced by John Landis.